I’m starting another DnD session and so I wanted to create another character, that way I don’t mix story lines up. I am therefore pleased to present to you… Dhashi, my anime magical girl aasimar warlock! She is a precious bundle of joy whom the real world is probably going to crush. I’m so excited.

Name: Dhashimri (“Dhashi”)
Age: 16
Gender: Female
Race: Aasimar
Class: Warlock
Alignment: Lawful good
Level: 1
General physical description: About 5’6″, slim and slightly muscular (from helping on her parents’ farm), long silver-blond hair, pale skin, bright blue eyes (which may indicate she’s of a solar aasimar line)
Dress style: Whatever the DnD version of pastel lolita would look like, so sugary sweet and really not very practical for an adventurer, probably; also, she has a staff that transforms her into her magical girl outfit for fighting bad guys, the outfit being blue and white with white wings (she can’t use them to fly, though, they’re just pretty anime wings)
Religion: Like many aasimar, she follows the Mulhorandi pantheon (which just so happens to be based on Kemeticism, HOW COINCIDENTAL UNIVERSE), with Ma’at as her otherworldly patron
Weapon of choice: She uses a staff called the Staff of Justice, which was given to her by Ma’at; the staff can be used to transform into her magical girl outfit, as a staff, or as a kind of bow
Hobbies: Thwarting evildoers, making friends, helping people, being positive, baking
Random skills: Can cry on command, knows a lot about farming, is good with animals and kids
Strongest positive personality trait: She remains positive and solution-oriented in nearly any situation, and is happy to do whatever is needed of her to get the task done; she’s also a very loyal and protective friend
Strongest negative personality trait: She takes people at face value without questioning their motives or being otherwise suspicious of people who seem overly nice, and has a hard time accepting betrayal
Sense of humor: She laughs often and about many things, and enjoys puns; she does not approve of “dirty” humor, though, especially if it’s degrading to a group of people or done at the expense of someone’s feelings
Temper: She’s very hard to truly anger, and when betrayed or otherwise tricked she tends to get more sad and disappointed than angry
Consideration for others: She assumes the best of most people and is always ready to lend a helping hand, be it to rescue someone from a dragon’s lair or help an old lady safely cross the street
How other people see her: It depends on your own personality; jaded or cruel people will find her annoyingly optimistic and cutesy, but more generous people will think she’s very sweet and admire her dedication to doing good in the world
Opinion of herself: She strongly believes her destiny is to defeat evil wherever she finds it, but her conviction doesn’t make her arrogant or otherwise full of herself; she just honestly believes she will triumph over evil because she is kind-hearted and believes in the essential goodness of the world
Background: Something happened to her parents when she was an infant, and she was taken in by a same-sex halfling couple (tiny gay dads!) who raised her on their farm; they didn’t know at the time that she was an aasimar, but when her heritage became obvious they made sure to raise her knowing who and what she was, and encouraged her to seek her destiny beyond their tiny farm
Philosophy of life: Good will always triumph over evil if you try hard and have faith!
Most important thing to know about this character: She may be young and childish in some ways, but she is definitely serious about her destiny and will go to great lengths to accomplish her goals 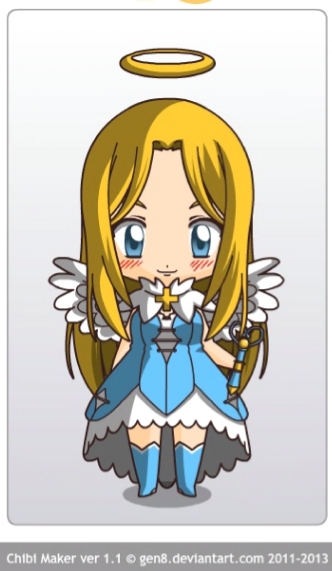 Other boring info for me to remember
Charisma: +2
Wisdom: +1
Armor: Light leather
Weapons: Besides her staff, two daggers and 20 “bolts” for her staff-turned-bow
Other items: Component pouch (for spell stuff), scholar’s pack (Book of Lore, bottle of ink, pen, parchment, bag of sand, small knife); also a piece of parchment which, when you draw someone on it and roll dexterity, can reveal the person’s deepest secret
Cantrips: true strike, sword burst
Spells: unseen servant, comprehend languages
Skills: Religion, Investigation
Vision: See 60 feet in dim light as if daylight, and in darkness as if dim light
Resistance: Necrotic and radiant damage
Languages: Common, Celestial, Halfling
Hit Dice: 1d8 per level
Hit Points at 1st Level: 8 + Constitution modifier